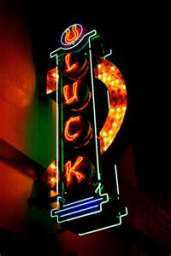 The “Good Luck “ sign was illuminated and bright. It looked like a beacon to Emily. She starred up mesmerized by the neon’s bright primary hues . The writing was messy and causal, like it had been painted in quick brush strokes.

“All right, here goes nothing,” she mumbled and walked towards the front door.

She pulled hard on the large brass doorknob, which was shaped into the head of a dragon with his mouth wide open ready to bite you in two. The inside wasn’t terribly crowded, Emily spotted a few groups of friends scattered and sipping cocktails. The bar was decked out in oriental parlor chic with red silk patterned wallpaper and matching Chinese lanterns. The decor gave an overall smoky vibe, which was surprisingly relaxing, but also seedy.

Emily scanned the room searching for Kevin. Her first thought was that maybe he didn’t come and that she was here all by herself like a dummy, but upon a second glance she saw him standing at the end of the bar in a group of five or six. She was relieved, but also annoyed because if he didn’t show she could have gone home and enjoyed the glory and notion that at least she had tried.

View all posts by mbwsurf